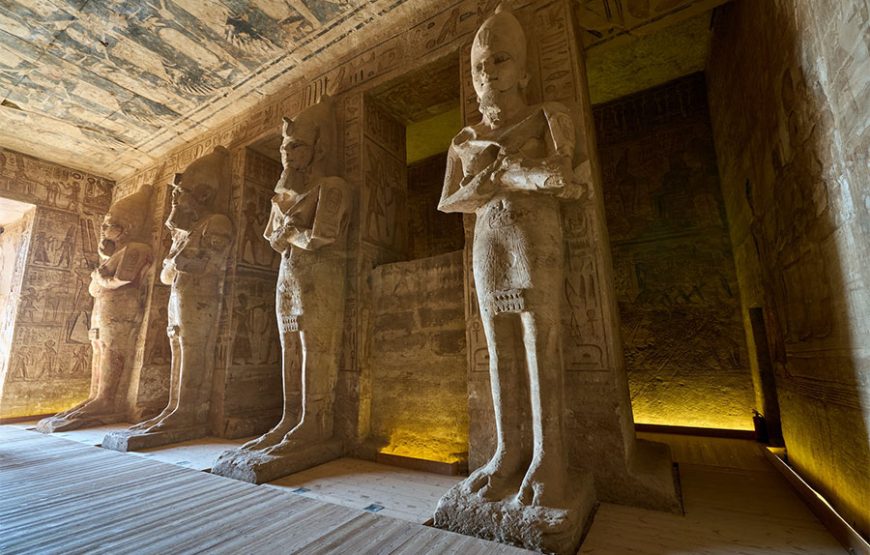 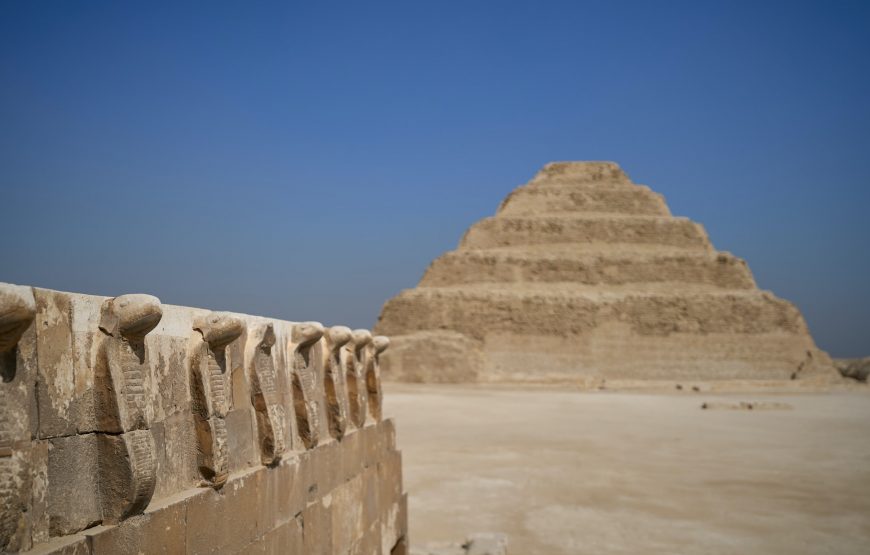 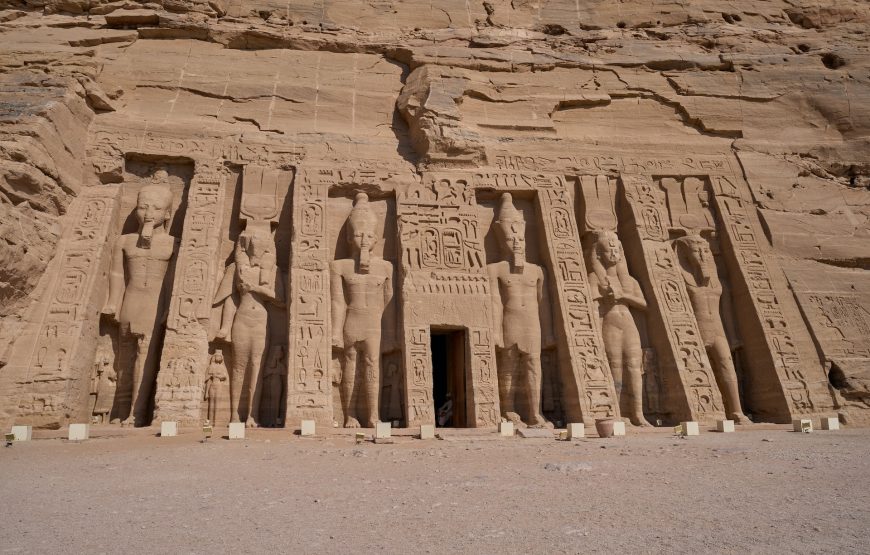 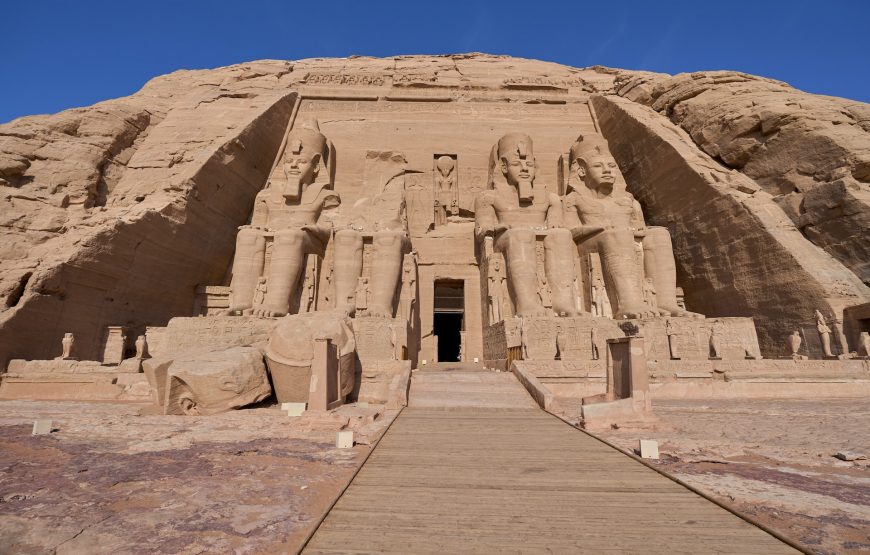 Our exciting 8 Day Cairo to Abu Simbel tour, including a Nile cruise, will make all your dreams of an Egyptian holiday come true. This tour combines not only the best and most beloved sites in Cairo, but introduces you to the ancient wonders of Upper Egypt and the Nile River Valley.

You will explore the famous Great Pyramids of Giza complex, including the Sphinx, as well as tour the Egyptian Museum, and of course discover the magic of the old bazaar at Khan El-Khalili in Islamic Cairo.

A short flight to Aswan will bring you to the charm of Upper Egypt where you will be amazed by the temples of Abu Simbel and embark on a once-in-a-lifetime cruise up the Nile River with stops at Kom Ombo, Edfu and Luxor. This 8-day tour is a carefully curated excursion that will check off every box on your Egyptian holiday dream list.

After receiving a warm welcome from your Secret of Egypt Tour Leader at Cairo International Airport, you will be accompanied in a comfortable vehicle to your 5-star hotel and the tour manager will help you with check-in. Before leaving you to relax for the evening, he will review the itinerary and confirm pick-up times for the following day.

Unwind and enjoy a complimentary welcome drink at the hotel, and settle in for a good night’s rest.

You’ll start your day with a 5-star breakfast, after which your tour guide will greet you and escort you in a comfortable air-conditioned car to kick-off your Cairo tour. You will visit some of the most well-known and beloved historical attractions in and around the city.

First stop will be the world-renowned Pyramids of Giza, Cheops, Chephren and Mycerinus, as well as the Sphinx and the lesser known yet intriguing Valley Temple. The largest of the Giza pyramids, The Great Pyramid, is the only one of the 7 Wonders of the Ancient World that is still standing.

Once you’ve finished marveling at the beauty of the Giza Pyramids complex, you will enjoy a lovely lunch at a nearby restaurant. Take the opportunity to rest and refuel for the afternoon’s adventures.

The next stop on the tour will be the incredible Egyptian Museum near downtown’s newly renovated Tahrir Square. You will be guided through many rooms full of tens of thousands of ancient artifacts on display. The Treasures Room is surely one of the most spectacular highlights of the museum. King Tutankham’s sealed tomb was first entered in the early 20th century and found fully intact, including all the incredible artifacts buried with him to take to the afterlife.

The Egyptian Museum also offers a special animal Mummies Room where you can view several animals’ mummies on display. It is included as part of admission with the 8 Day Cairo to Abu Simbel with Nile Cruise Tour.

The last stop of the day will be in Islamic Cairo and the colorful and historic Khan El Khalili Bazaar. This area of Cairo is widely agreed to be a must-see when visiting Egypt. The bazaar, in existence since the 14th century, consists of narrow streets and enchanting cafes and shops full of keepsakes. Shop if you like, but if not, you won’t be disappointed exploring this charming part of Cairo.

Once finished at Khan El Khalili, you will head back to the hotel for an evening of relaxation or of more free-time exploration of the “City that Never Sleeps” after sunset if you like.

After another delicious breakfast at the hotel, you will check out and meet your tour manager who will escort you to the Cairo International Airport for the short flight to Aswan. Upon arrival at Aswan, another Secret of Egypt tour leader will be there to greet you and take you for a tour of Aswan.

First stop will be the Aswan High Dam. Second stop will be the lovely Temple Philae, built in honor of the goddesses Isis and Hathor. And lastly you will make a stop at the unfinished Obelisk.

Your tour leader will escort you to your comfortable hotel for the night, and will help you with check in and confirm the itinerary for the next few days in Upper Egypt. You will have the remainder of the afternoon and evening to relax and unwind.

Start your day with breakfast at the hotel, then you will join your tour guide and the rest of the group on a comfortable coach bus for the journey to the incomparable temples of Abu Simbel. The spectacular rock-cut temples built for the great King Ramses II and his famous wife, Queen Nefatari, are some of the most incredible sites you can visit in Egypt. Both temples, which were dedicated to the sun god, were actually relocated to their present site when the Nile was dammed and the waters of Lake Nasser threatened to submerge the temples. They have been named a UNESCO World Heritage Site.

After your experience at Abu Simbel, your comfortable coach will return you to Aswan where your tour guide will accompany you to the board of the luxury cruise ship you will call home for the next 3 nights. Once checked-in, lunch will be served and you will have a relaxing afternoon and evening on the water at Aswan.

Today begins the magical cruise down the Nile which will get underway while you are enjoying a delicious breakfast onboard. Relax and enjoy the ride as the ship glides along on the way to Kom Ombo. Upon arrival at Kom Ombo you will go ashore to witness the spectacular twin temples in one, dedicated to both the falcon god Horus and the crocodile god, Sobek.

Next stop will be Edfu, home of the Temple of Horus. During the leisurely cruise to Edfu, you will be served a delicious and refreshing lunch. Upon arrival at Edfu, your tour manager will accompany you through the bustling town of Edfu to the Horus Temple, known as the best-preserved temple in Egypt. It’s an incredibly beautiful and unforgettable structure.

After exploring the Horus Temple, you will return to the ship and enjoy afternoon tea as it sets sail for Esna, your final destination for the day. Dinner will be served onboard, and you will spend the night on the peaceful waters at Esna.

A peaceful breakfast will be served to you this morning as you enjoy a slow and leisurely sail to Luxor. At Luxor the adventure begins as your group will be shuttled to the Luxor West Bank for today’s incredible sightseeing. First you will journey to the Valley of the Kings; then you will marvel at the Temple of Queen Hatshepsut; and finally, you will end the day at the massive and incredible Colossi of Memnon.

After this action-packed day, you will be escorted back to your cruise where you will enjoy lunch, dinner and the remainder of the day at your leisure. You will spend a restful and peaceful night on the water at Luxor.

Two spectacular temples await your visit after you’ve enjoyed one last breakfast on the cruiser. The Luxor East Bank is home to the impressive Karnak Temple and the lovely Luxor Temple. The Karnak Temple was once a massive complex of temples within an ancient city. It is considered one of the largest worship sites ever uncovered and preserved. Once you’ve had time to explore both of these must-see sites, you will be escorted by the Secret of Egypt tour leader to the Luxor Airport for your short flight back to Cairo.

After arrival at Cairo, your tour manager will reconnect with you and get you back to your hotel where you can settle in for the night.

After taking breakfast at the hotel, you will check out and meet your tour leader who will escort you to the Cairo International Airport for your departing flight.

The staff at Secret of Egypt is positive that you will have an unforgettable 8-day tour of Cairo, Abu Simbel and the Nile Cruise, and it is our hope that you will return in the future. 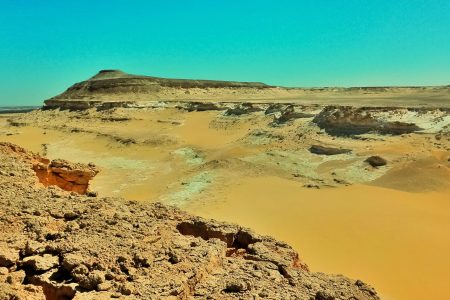 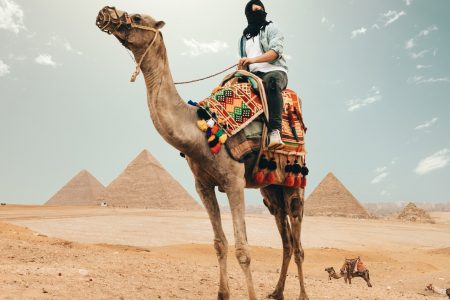 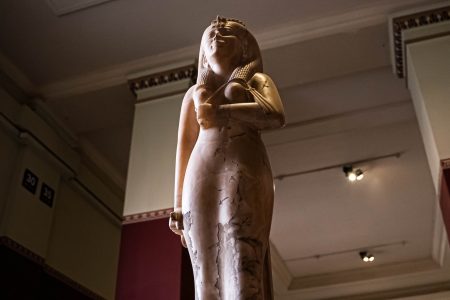 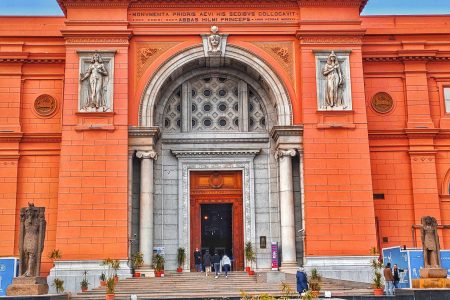